These days more and more people feel the need to have a screen recorder program in order to capture their screen. This recording could take place while playing a game, watching an online video stream or having an important video-conference through the Internet.

The VideoSolo Screen Recorder is a program that could be installed and run on Windows/Mac systems. It allows you to record videos and save screen captures of a defined screen area on your computer. It also enables users to record audio from a microphone and from your computer system at the same time.

VideoSolo Screen Recorder can record and store any activity happening on your screen to a video file. Whether they are skype chats, online videos, demonstrations, games, etc, this piece of software can easily handle them all.

When you launch the VideoSolo Screen Recorder program for the first time, you’ll notice the user-friendly interface that provides main functions of the software in a simple and clean structure to the users.

Now let’s take a look at these functions with more details.

Recording video is the main functionality of this program which could be very useful for different situations such as recording a gameplay or preparing a tutorial video for online education sessions.

One of the great advantages of using VideoSolo Screen Recorder is that you could easily choose between the two options for recording video which are custom area or full screen. Even better, the recording area could be moved while recording, giving the user a better experience.

On the other hand, you might have noticed that many video tutorials come with annotations. That’s another option that is provided to you by this powerful recorder making it very useful for educational videos.

The interface will show you editing options after recording is finished. Although its editing tools might seem basic compared to a professional video editing software, but it could satisfy most essential needs related to video capturing.

VideoSolo has a powerful and independent audio recorder. If you only want to record the audio, it can help you do audio recording with ease. Both your microphone and system sound could be recorder using the software.

While recording audio, you could adjust the sound volume. Also, depending on your requirements and/or storage capacity you could decide which sound quality option is most suitable for your need. In addition, you audio track could be saved in various sound file formats such as WMA, M4A, AAC, or MP3.

In a way, recording sound is very similar to recording video with VideoSolo Screen Recorder. Clicking on the “REC” button would start your recording session, and after it is complete you have the ability to do basic editing to your audio track before saving it in a file.

With one click, you can take a snapshot. Apart from recording audio and video, VideoSolo Screen Recorder will allow you to take screenshots of particular screen areas.

You can then make use of drawing tools to highlight points of interest or image hotspots. You can also use this feature while recording videos. With this program, you can now make any screenshot any how you want to.

VideoSolo Screen Recorder software has many other functions to help you perform better audio/video recording. They include recording history, scheduled recording, shortcuts control, and track the mouse.

How to record your computer screen with VideoSolo Screen Recoder

Follow these simple steps to capture your computer screen:

There are 3 types of licenses available to purchase: One Year, Single and Family.

With One Year license, you could download and install Screen Recorder software on one computer and get updates for a year. It costs you $29.95.

If you want to use the software for a longer period of time with lifetime updates, we recommend Single License which could be bought for $39.95. But you should know that with this license you could only use the software on one computer.

For $69.95, you could install the software on up to 5 computers and get lifetime updates. This multiple-user license is more suitable for families which require using a screen recorder program on multiple computers.

Another great advantage of VideoSolo Screen Recorder is that it’s available for both Mac and Windows operating systems.

In order for users to evaluate the software before purchasing it, it is possible to download a trial version of the VideoSolo program. 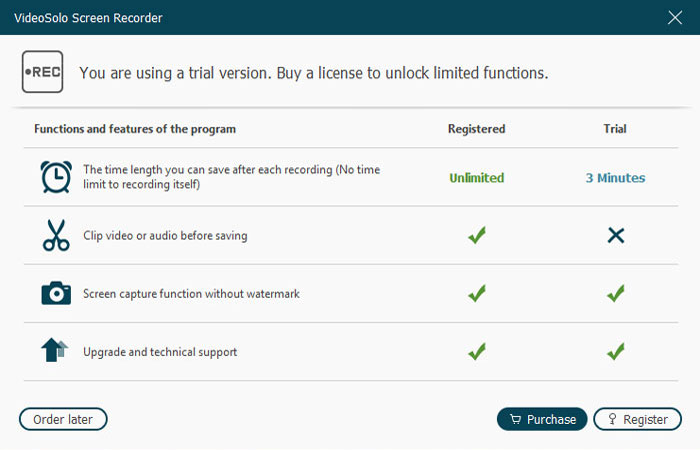 Please note unsaved recording can’t be recovered while using the trial version. So, it’s recommended that for official recordings you buy and use the full version of VideoSolo Screen Recorder.

VideoSolo Screen Recorder is more than a screen capture program. It comes with multiple advanced features which often could only be seen in different programs instead of a single software. In addition, the program’s ease of use along with its great features make it a suitable options for both beginner and professional users.