How to ‘Find My Phone’

Every day, thousands of people who just lost their iPhone or Android smartphones desperately type “Find My Phone” or similar terms into the search engines search boxes in order to find their devices or find a way to do that.

Here we present methods for finding a lost or stolen cell phone or tablet powered by iOS, Android or Windows Phone.

The following method works for cell phones and tablets running on both iOS and Android:

‘Your Timeline’ is a feature in Google Maps which lets users keep track of the routes they have traveled and the places they have visited. This is especially helpful when trying to find a phone or tablet, since ‘Your Timeline’ displays a history of the places where the device has on the map along with their names (such as bars, cafes, airports, etc.).

To use this method, users need to open Google Maps on their computer (Windows, Mac OS X, etc.). Next they need to use the same Google Account linked to their tablet or phone to sign in to Google Maps. After that, it’s very simple to choose the ‘Your Timeline’ from the menu.

The good thing about this method is that even if the lost/stolen device is out of battery power or has been turned off, users could still access the location history of the device on the map. Luckily they could find the device or the person holding it on the most recent (or most visited) locations on the timeline.

Please note that in order for this technique to be working, Location History (or Location Services on iPhone or iPad) should be active on the device.

The official Google tool to track and find Android tablets and smartphones is this online tool which is very easy and simple to use. All users need to do is to open Android Device Manager with the same Google Account connected to the device. In case there are more than one Android devices are linked with the account, the missing one should be selected in the dropdown menu. 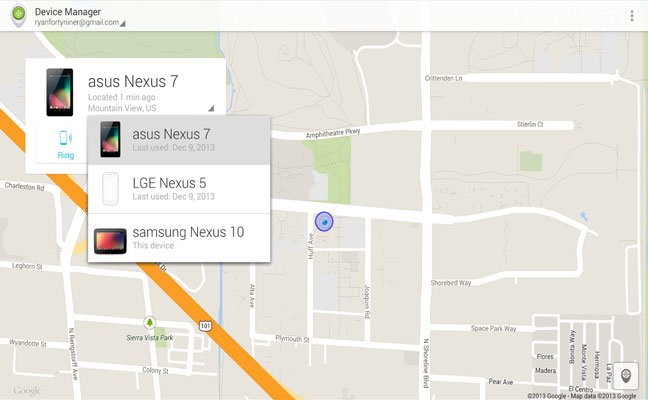 In addition, Google have made it easier in the last updates for users to find their phones using this service. Now they could enter “where is my phone” in the Google search box to see the location of their lost phone on a map shown before the search results.

Of course here it’s necessary that the phone or tablet is connected to the internet and the same Google Account.

Using apps to track and remote control the device

Using some tracking apps such as Android Lost, users could take control of their device and perform actions such as locking their phones, reading text messages and accessing the location. But because this way is fully functional on Android 3.0 or lower versions we don’t explain it here since most Android phones and tablets these days run on higher versions of Android. So currently this method isn’t very efficient.

Of course, this is not the case for devices which already have a tracking app installed and activated on them. For these ones, users could easily find/control their gadgets based on the proper instructions provided by the app developer or website.

Now, the situation is a little different for iPhone (and other iOS powered device) users. The term “Find My iPhone” may refer to the popular app or the service provided by Apple iCloud. In either case, tracking and finding the stolen or lost iPhone is very easy.

For the iCloud service, all users need to do is to sign in to their account and click on the button for “Find My iPhone”. A map will show the location of the device.

And for the app, it is almost the same. Users log in to their account and find the location of their iPhone or iPad on the map.

Users with Windows Phone powered smartphones could also use a similarly named service provided by Microsoft to find or control their phones. After signing in to the Microsoft Account, the ‘Devices’ item from menu should be selected. Next selecting the phone which is missing and finally clicking the ‘Find My Phone’. Users could see their device’s location on the map. In addition, more options are available as well. These include ringing, erasing and locking.