Do you have an old laptop in your drawer that you are planning to abandon? Do you want to make efficient and effective use of your laptop? If yes, then there is a need for you to read the AirBar review to know if the gadget is worth trying to give your screen the touch functionality.

The air bar is a device that needs to be connected to your computer through the USB port and then attached using a magnet to the bottom of the computer screen. The AirBar is projected as an invisible light field.

After connecting the computer with the AirBar, the screen has the touch functionality and you can use your finger to move a window, click on links and do lots more.

You can also make use of your glove or pencil because the AirBar doesn’t distinguish between a finger, pencil or glove. The bottom line is that the AirBar works with any device that comes in contact with its light field. 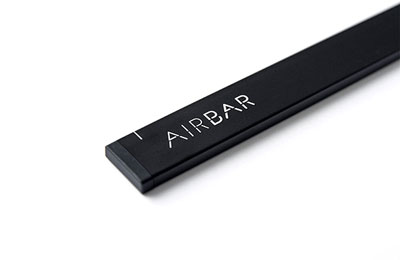 To use the AirBar, you don’t need to install the software because once the USB port has been connected and attached to the bottom of the computer screen.

The Pros and cons of the AirBar

How does the AirBar work?

The Infrared light is bounced off your finger hereby interpolating where your finger touches the computer screen.

There are many laptops that come with a genuine touchscreen but when the model of the laptop you want doesn’t come with genuine touch screen, the AirBar is a sleek, affordable and accurate option that will help you enjoy your desired laptop.

It is a thin, sleek black bar that comes in different options (13.3, 14 and 15.6 inches) that allows it to fit your display perfectly.

You might be thinking of what will happen when you accidentally close your laptop? The gadget uses laser technology that allows the AirBar beep loudly whenever you hand is on top of the screen to shut the lid.

The loud beep notifies you that there is a need to remove the device before you shut down the system.

Note: The loud beep alert can only be sent when the computer is on.

The AirBar performance and OS support 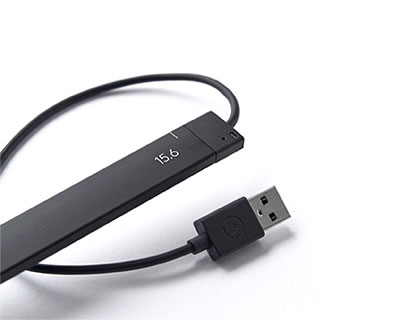 The perfect definition of the AirBar is plug-and-play. Once you attach it to your computer, the peripheral driver is installed and you can use the gadget. An invisible light field is projected by the AirBar above the screen for feedback to your notebook.

Once the finger, pen, stylus or anything is used to break the field, the gadget detects where the finger or other device is on the screen.

The AirBar technology is cool, sleep and impressive to use but it is not as accurate as of the genuine touchscreen. It makes scrolling, navigation, and pinch-to-zoom easier. You can only use two fingers with the AirBar (that’s ok for practically every function you will be performing on windows 10).

When two fingers are placed on top of each other, the gadget sometimes wouldn’t recognize the second finger. This is because both fingers have blocked the light and only one digit can be noticed.

The gadget works perfectly with Chrome OS in addition to the windows 10 but it doesn’t work perfectly with macOS because mac wasn’t built with touch in mind.

The type of mac you use can also influence the way it will work because some mac Mac is compatible. MacBook Air is one of the Mac that will work with AirBar (the thick bottom bezel is helpful).

The most popular option of the AirBar based on sales is the 15.6-inch display but if you want portability, you can get the 13.3 or 14-inch display too.